Instead, it has become a story about how your mojo can vanish and return.  I was working quickly and had 4 ships under construction, with 3 of them either ready to be, or in the process of being rigged.  Then, I walked in one morning and found a scene of partial despair.  Turns out that our 16-year-old cat had decided to hop up on my painting table during the night.  She hasn't done that in years, so why now?  No idea. 🤬 cat. . . .

Of course, the most complete ship was the one that took the worst damage.  The Russian 46 gun ship had all the standing rigging and most of the running rigging done.  This turned out to be a good thing, as while the masts were all knocked askew, I was able to pull them back into line using the standing rigging.  The brass ratlines didn't come out anywhere near as well, though.  I wound up having to replace 3 of them, which meant I had to order a new set (they aren't something that I keep an excess stock of lying around).

The other two ships weren't as badly damaged, since they were sheltered behind the Russian.  Only one ratline went missing from them, and that was my fault.  I went to glue it back in place, dropped it, heard it hit the tile floor. . . and it vanished.  So, time to order TWO spare ratline sets.

Once those arrived, I was ready to get started again.  Then, the hospital called.  I've been needing some kidney surgery for a while but it had been delayed several times by COVID.  Now, they were ready for me on the 14th of April.  I'll spare you the gory details, since 1) nobody wants to hear them, and 2) I don't know any of them; I was unconscious for the bloody, cutting parts.  After an overnight stay for observation, I went home the next afternoon.  Oddly enough, the experience left me in NO mood to do any hobby type work.  Who could have guessed? 🤷‍♂️  Also, I realized that operating knives, scissors and glue might not be a good idea while under the influence of painkillers.  After all that drama, I was finally able to get back to work and get the three ships ready for their debut here on the blog.

Now, to be fair, they weren't all done from scratch.  Instead, along with working on my Trafalgar project, I decided to do some more unicorn hunting.  It's one thing for me to say that I finally finished up my Russian 46 gun frigate.  It's another thing altogether when I tell you that ship has been "under construction" since September of 2014!  In that time, the overall collection has gone from 86 ships total to 114 as of April 24.  So, even though he (Russians call their ships "he," not "she") was not the first one finished in this group, mere seniority gives him the first spot in this post. 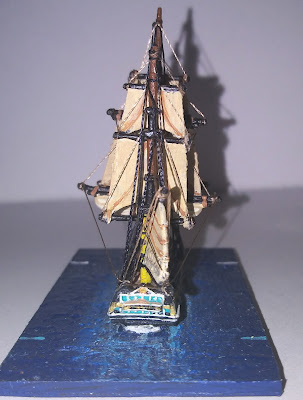 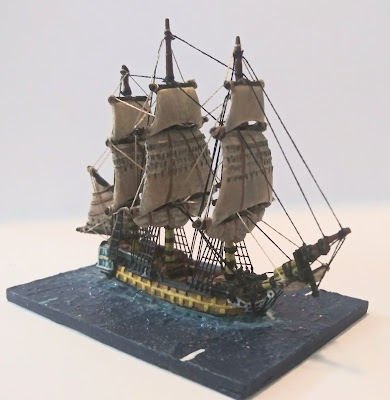 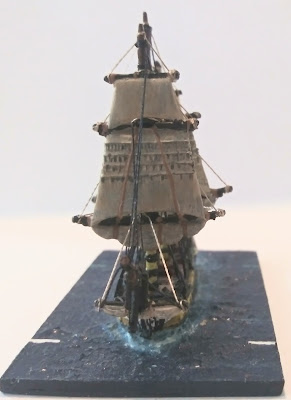 Now, this is not his first appearance on the blog.  Back in January 2018 this ship was featured in a post called "Unicorn Hunting" (https://mymodelsailingships.blogspot.com/2018/01/unicorn-hunting.html).  I ended that post with the quote, "However, no matter what their future careers may take them, I'm determined to cut down on the size of the unicorn fleet."  So, just three short years later, here we are! 🙄

Eagle-eyed readers will notice that this ship isn't painted in the usual black/white scheme associated with Russian and American ships for this period.  There is, of course, a reason for that.  As I said in the earlier post, the Russian Navy didn't start painting their ships black and white until about 1802.  One of two of the 46 gun ships might have been around then, but they were all retired by the time the Russo/Ottoman War of 1806 broke out.  So, this ship gets an earlier style scheme.
Next up is a French 74.  She only had a furled sail knocked off during the Great Cat-astrophe (you know the puns here are bad; too late to complain now) so was easy to fix.  Truth be told, I got a little lazy with this ship.  The hull and masts are the same shade of yellow.  I doubt that they were ever this exact a match.  According to Boudriot's The 74-Gun Ship, French lower masts were usually black in home waters, and white in the tropics.  His information is for the the-Revolution navy of 1780.  I suspect the regulations stayed much the same, but the disorder of the Revolution made them much harder to obey.  Well, that's my justification for it anyway. 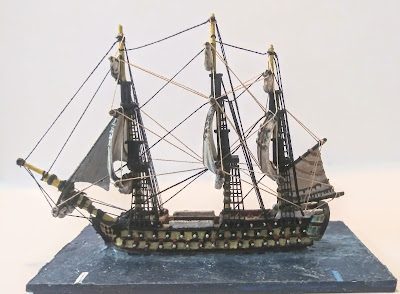 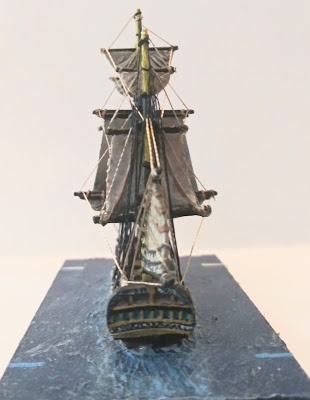 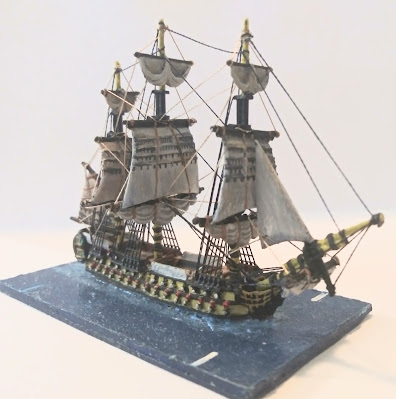 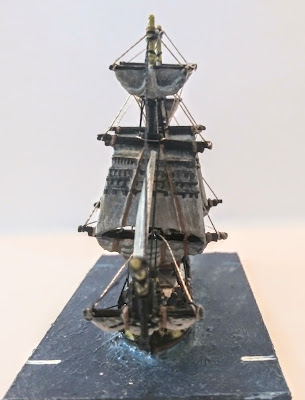 The last ship of the three is a Spanish 74.  As mentioned in an earlier post, my Spanish navy for Trafalgar is complete.  Instead, she will take the part of Intrepide in the French fleet, as that was a Spanish ship in French service.  I decided to try a slightly different shade of yellow for this ship's hull, and it was successful but not in the way I thought.  Instead of a weathered yellow, what I got was a look that I think is very similar to the varnished sides of the 1770s and earlier.  I don't think it dates the ship too terribly, and it is a different look than unending variations on yellow. 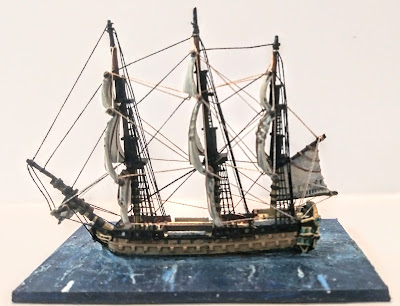 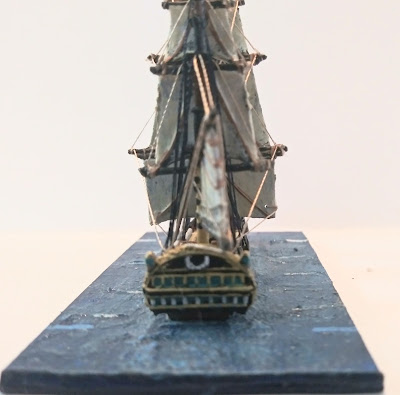 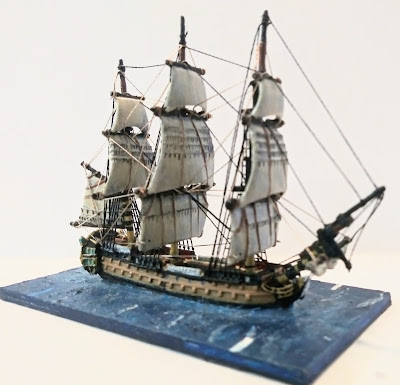 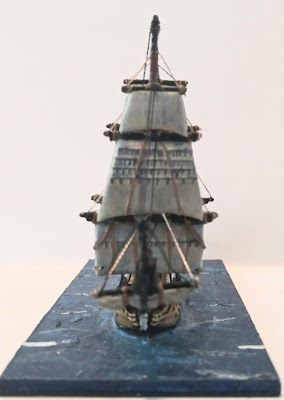 At this point, there are two ships left to do (an 80, and a British 74 Common) and the Combined Fleet will be complete.  That, to be honest, is an odd feeling.  I will still need to build some frigates for them, but all of the ships of the line will be done.  After that, just eight more British ships of the line will complete that fleet.  I owe the British one frigate, instead of the three for the French.  Still, the end is in sight at last!
For sticking this out until the end, here's some bonus content.  At the beginning of the post, I said there were four ships under construction.  Well, here's a sneak peek at number 4: 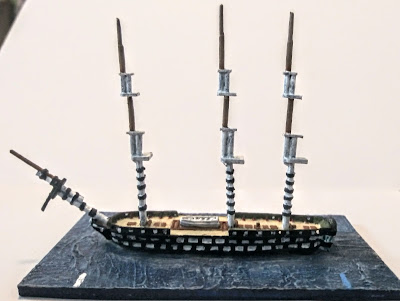 She's the USS Franklin, one of the 74s that the US Navy launched at the end of the War of 1812.  She's called a 74, but was actually pierced for 87 guns (DANFS says 63 x32 pounder long guns and 24 x 32 LB carronades).  You can do a plausible "what-if" breakout style scenario for her and a companion, but it's more likely that she'll spend most of her life under another flag as needed.
Finally, after reading my gripes about the cat, it seems that she deserves a picture here too.  So, without further ado: